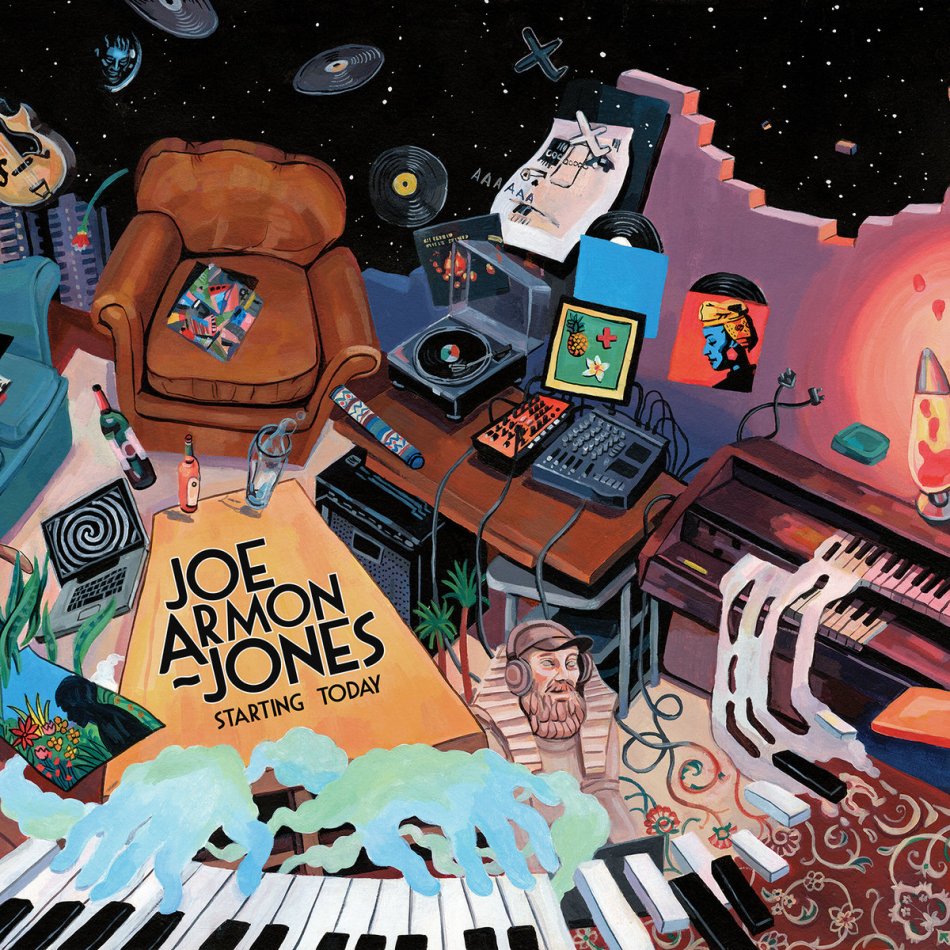 The burgeoning, eclectic and talent-heavy jazz scene in London keeps on reaching new heights. With the likes of Sons of Kemet, Blue Lab Beats and Brownswood Records releasing stellar albums that transcend genres and blend influences from around the world, one of the most gifted keyboardists I have ever witnessed both live and on record, Joe Armon-Jones, comes through with his astonishingly mesmerising and spiritually enlightening debut album Starting Today, released on Brownswood Records.

As a member of Ezra Collective and one-half of his partnership with Maxwell Owin on Idiom EP, Joe’s diversity in sound enables him to break free from traditional jazz and experiment with genres, blending hip-hop, 2-step and dub music into a vibrant, eclectic sound that makes your body groove. There is so much attention to detail on this album. Whether it’s Joe’s virtuous keyboard playing, Nubya Garcia’s wonderful saxophone, Oscar Jerome’s gorgeous singing, the drumming, oh the drumming! Every sound, beat, bass note, key, voice just oozes talent, soul and heart.

6 tracks long, the album starts with it’s self-titled lead single, a spiritual, tribal stunner. With pulsating rhythms, hypnotic saxophone solos and singer Ras Asheber’s uplifting lyrics about ‘spreading love and devotion,’ the track is spiritually uplifting with it’s sonic complexity and tribal tone. “Almost Went To Heart” brings more of a positive, light mood, with emphasis on Joe’s effortless piano playing and stellar drumming throughout. “Mollison Dub,” as the name suggests, is dub-heavy in it’s grooves, with James Mollison of Ezra Collective coming through with his sound. “London’s Face” features the soul of another gifted London musician, Oscar Jerome, who lends vocals and brilliant guitar to a dynamic, sonically rich and diverse track that just oozes soul. “Ragify” is easily my favourite track on the album, a more hip-hop and dancefloor inspired mood that continues to blossom throughout into a monumentally powerful and groove-heavy vibe that is just irresistible. The basslines are unreal, the subtle keys, as well as the soft vocals are stunning throughout. Big Sharer comes through with a few stellar raps to close the track out brilliantly. “Outro – Fornow” is a short but sweet neo-soul inspired track that closes the album beautifully.

What Joe’s greatest strength is apart from his perfect keyboard playing, is his ability to bring different musicians together and give them their shine. In a way, this project feels like a jam session, with every artist having their moment to showcase their talents, while also blending their artistry with the rest of the group. The chemistry on the album feels organic. It sounds like Joe has been playing with Nubya Garcia, Moses Boyd, Oscar Jerome, Kwake Bass, Dylan Jones, James Mollison, Luke Newman, David Mrakpor, Ego-Ella May and Mutale Chashi for decades. Even the smallest contributions on this album gave it character. Joe Armon-Jones just goes from strength to strength, and I’m slowly running out of superlatives to describe Starting Today. The more I listen to the album, the more I pick up on subtleties in the rhythm changes and instrumental progressions. The percussion, horn sections and keys are all intertwined effortlessly throughout this album to give it energy unlike any other jazz release this year.

Major props to Joe for creating a memorable jazz masterpiece and bringing so many talents and sounds together to craft one of the best albums this year. You can listen to Starting Today below on Spotify, but make sure you support the music in any way possible, it really is worth it! Released via Brownswood Recordings.