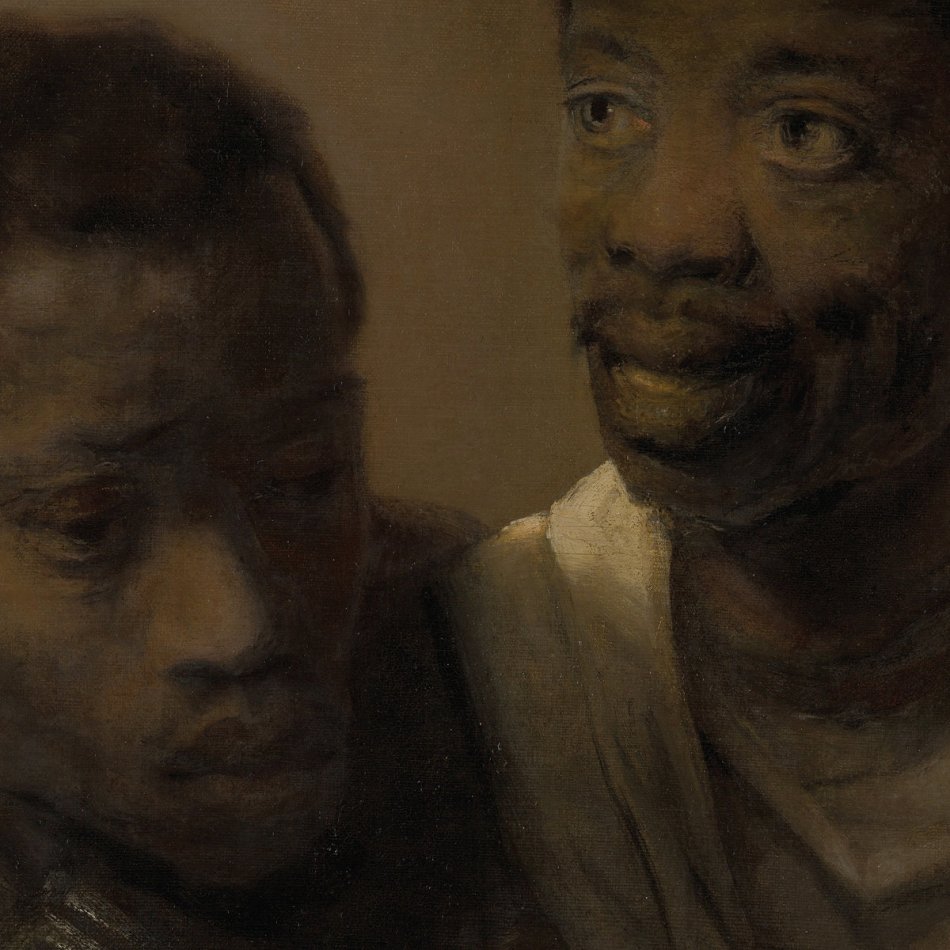 At this point, billy woods announcing new albums gives me more joy and excitement than my own birthday. Since properly getting into his music via Armand Hammer’s 2017 work of art ROME, I have been enthralled, fascinated and frankly obsessed by his ability to paint such vivid pictures and stories of dark, dystopian and eerie experiences, while simultaneously giving the listener an encyclopedic amount of heavy material to digest for an extensive period of time. To me, he’s more of a poet and historian than merely a rapper, investigating and analysing the human psyche in the context of the Black experience both past and present. 2019’s Hiding Places with Kenny Segal captured this so poignantly, and has since become his most accessible but cohesive and complete body of work to date. What I admire about billy woods is not only his genius on the mic, but his penchant for the experimental, left-field and strange sounds that capture his disorienting stories perfectly. I was listening to Terror Management on repeat not too long ago, which to me, at least up until now, was his most sonically eclectic and experimental album to date, capturing this harsh, cold and skeletal sound that complements his bleak lyricism and sense of existential dread perfectly. His new work of art / literature / poetry Aethiopes is probably his most sobering and depressing album to date. Produced entirely by Preservation, the album swings from one sonic extreme to the next, enabling billy woods to paint a depressing, miserable canvas of life, constricted by the realities of socio-economic and political turmoil, with barely any hope or note of optimism, and I love it so much as a result.

First off, I really want to emphasise the fact that Preservation deserves as much credit and appreciation for crafting such a vast and immersive soundscape as the other genius on the album. Ever since 2015’s Days with Dr. Yen Lo, he has become one of my favourite producers, incorporating tons of tribal percussion and string sections that are truly stunning. When the album kicked off with “Asylum”, I knew this was going to be one of his most sonically expansive projects to date. The chilling strings and the piano being introduced as woods starts the album off with “I think Mengistu Haile Mariam is my neighbor / Whoever it is moved in and put an automated gate up / Repainted brick walls atop which now cameras rotated / By eight, the place dark, one light burn later” makes for one of the eeriest and gloomiest openers to an album I’ve heard in a while. While his music is packed with political and cultural references that, combined with his intelligent wordplay and deep historical knowledge, make for a dense and revealing listen, the thing I love the most about his music and lyrics is how each phrase, each bar, each idea is filled with imagery. I’m able to visualise a lot of what he says, and as someone who is into experimental cinema, it feels like a gift to be able to have someone who is able to articulate stories, settings, surroundings so vividly. Whether it’s painting the picture of what it’s like to live in an asylum, or being stood up like on “No Hard Feelings”, he’s always got a story to tell. Speaking of “No Hard Feelings”, the overwhelming accordion-like synths are almost uncomfortable to listen to but simultaneously so powerful. I remember rewinding “Wharves” 3 or 4 times on my first listen, it is simply THAT incredible. From the tribal percussion-heavy beat to billy woods recounting the stories of white farmers in Zimbabwe taking land from native Black people, while simultaneously referencing the horrors of colonialism and refugees risking their lives at sea over wars dictated by the colonisers (that’s my interpretation of the opening line anyway) makes this quite a powerful track. “Sauvages” features an incredibly claustrophobic verse from Boldy James over this hypnotic and dark beat, while woods’ verse is poignant and very visceral. “Dre shot his uncle for beatin’ his mom / Beat the case, started eleventh grade like nothin’ was wrong” and continues Dre’s narrative in as much detail as you can imagine. There’s some incredible storytelling here, and it ends with a cool Gabe ‘Nandez feature. Preservation creates this confined, off-kilter soundscape on “The Doldrums” as woods explains the dichotomy and anxiety of needing to make money via drug dealing, yet having to wait for business to come through (the doldrums are areas of low winds) being with the dangers and pressures in doing so, linking it with the harsh reality of capitalism not allowing you the comfort to relax for a day because if “You don’t work, you don’t eat”.

The album picks up steam on “NYNEX” featuring the incredible ELUCID, Denmark Vessey and Quelle Chris. The rough, percussion and drum-heavy track gives everyone a perfect soundscape to rhyme effortlessly. Some great lines here, most notably woods’ “The future isn’t flying cars, it’s Rachel Dolezal absolved” line that highlights society’s numbness to racial issues and a collective unwillingness to hold people to account, which can obviously be applied to politicians and other notable people with influence. Furthermore, he highlights the fact that no matter how much technological innovation there is (which will only really be available to the middle and upper classes anyways), society’s collective dismissal of Black issues and Black experiences doesn’t equate to social and humanitarian progress for everyone, when it should. Quelle Chris’ “Eyes bleedin’ like Giuliani” line made me chuckle too, but everyone came out swinging on this track. It then flows into the sombre “Christine” featuring Mike Ladd, which is one of my favourite tracks on the album. For one, the beat is moody and reflective, with woods’ incredible storytelling setting the scene poignantly. The narrative of him being in the back seat of his car, listening to his parents argue, with imagery of dead men bleeding out on the side of the road by an accident is all quite overwhelming. It really is some of the purest and most visceral storytelling I’ve heard this year. The “Gingerbread house full of abused kids” line is chilling and uncomfortable to listen to, as he references the story of Hansel & Gretel getting abused and eaten by a witch, who takes advantage of their lust for sweet candy. Having recently watched the Jimmy Saville documentary on Netflix, this bar hit hard, as it’s crazy to think that what we sometimes consider the safest place for children sometimes ends up being the most dangerous and scary. It’s definitely one of the more poignant lines on the album. Mike Ladd’s feature is great and fitting here as well. “Heavy Water” featuring Breeze Brewin and El-P sounds like some Fantastic Damage-era recording (massive shoutout to Preservation), as both features trade verses like it’s 2002, while billy woods’ abstract lyricism is weird an fantastic. What on earth is a “Multi-verse Benzino”? It sounds so good, though. I was excited to see Fatboi Sharif feature on “Haarlem”, and let’s just say it was not what I expected. billy woods’ political references, especially that of Dutch colonisers in Africa that have their skulls used as lanterns, among other fascinating lines. The first half of the beat is dynamic and playful, then breaks into these distorted, abrasive piano keys that, to be honest, are even too experimental for me, but with each listen, the beats grows on me. Hearing Fatboi Sharif spit this absurdist, abstract verse on a billy woods album makes me proud of him and his artistic growth over the last few years, and that’s a name you should remember for a long time. The dynamic, reggae-influenced beat on “Versailles” features a legendary verse from Despot, who really is a cult legend in hip-hop, so it’s so great to hear him rapping again. Drawing comparisons between French colonialism and exploitation and capitalism in America, both woods and Despot are able to create this angsty, depressing reality within their raps that speaks to the struggle of millions trying to get by with the bare minimum. Parts of the US and the UK (including areas of East and South London) feel like third world countries, and speak to the corrupt power that royalty and rich oligarchs have over the majority of society, thus people in a way falling victim to exploitation, despite capitalism and private business creating the facade of ‘work hard and you’ll be successful and free’, which is obvious bullshit. On “Protoevangelium” featuring reggae / dancehall legend Shinehead, woods references the absurdity of hustle culture and this notion that working hard “Tryna pay the rent” isn’t black empowerment, “That’s you tryna pay the rent”, as in, hustling to pay rent and living a comfortable life doesn’t do anything empower or liberate Black struggle. The last two tracks, “Remoresless” and “Smith + Cross” are the two of the most emotive and depressing tracks on the album to me. On the former, woods speaks on the facade of wealth bringing happiness and freedom, especially amongst the hip-hop community, highlighting metaphorically and from experience that “My accountant is a head full of bad memories and sad endings / It’s all payment pending”. woods speaks on the anxiety of being in bondage with unbreakable contracts that strip him of his own wealth, again an obvious criticism of capitalism and authoritarianism. The gorgeous synth sample is just perfect for the heaviness and reflective nature of the track, as his poignant raps are just perfect for this track. The closer features this airy, atmospheric beat, and woods exploring themes of the exploitation of Black people both past and present. The part that stood out to me the most was the final bars of his verse. “Fire in the cane fields, generational trauma / At the museum, eyes glassy from the pain pills / Me and her in the diorama”. Already having explored themes of colonial exploitation, he is now standing on the other side of that, observing like white people looking at historical artifacts at the museum, with such emotional distance from the atrocities caused by their own ancestors. It made me think of the British Museum in London and their theft of African and Carribean items. It’s like white people going to a zoo and ignorantly looking at all the animals without a care in the world as to how they are treated, and this 100% applies to how white people in positions in power collectively tend to view Black people. A generalisation of course, but considering the extent of institutional racism in western countries, especially colonisers, I think it’s merited.

I’ve only scratched the surface of what can be said about billy woods’ poetic, intricate masterpiece. It will take more time to fully digest and uncover the layers to this shit, but man is this one of the most rewarding listening experiences I’ve had in a while. His poetic and descriptive landscapes and stories of pain, fear and trauma are explored with a sense of hopelessness and bleakness. It’s a dystopian body of work that feels heavy in its themes, yet Preservation’s production is delicate and intricate throughout the entirety of the album. He draws parallels between his own struggles and those of his father growing up in colonial Zimbabwe with the wider contemporary struggles Black people experience in the face of tyranny, colonialism and exploitation by either capitalism that forces people to overwork themselves for a few pennies, or an authoritarian system that prevents the freedom of expression or the right to criticise or hold to account those who are in power. The themes are of course so relevant, and combined with billy woods’ genius wordplay and incredibly storytelling, as well as Preservation’s flawless production, Aethiopes is one of billy woods’ most complete albums to date.

Make sure you listen to the album below via Bandcamp and don’t forget to support. Released via Backwoodz Studioz.