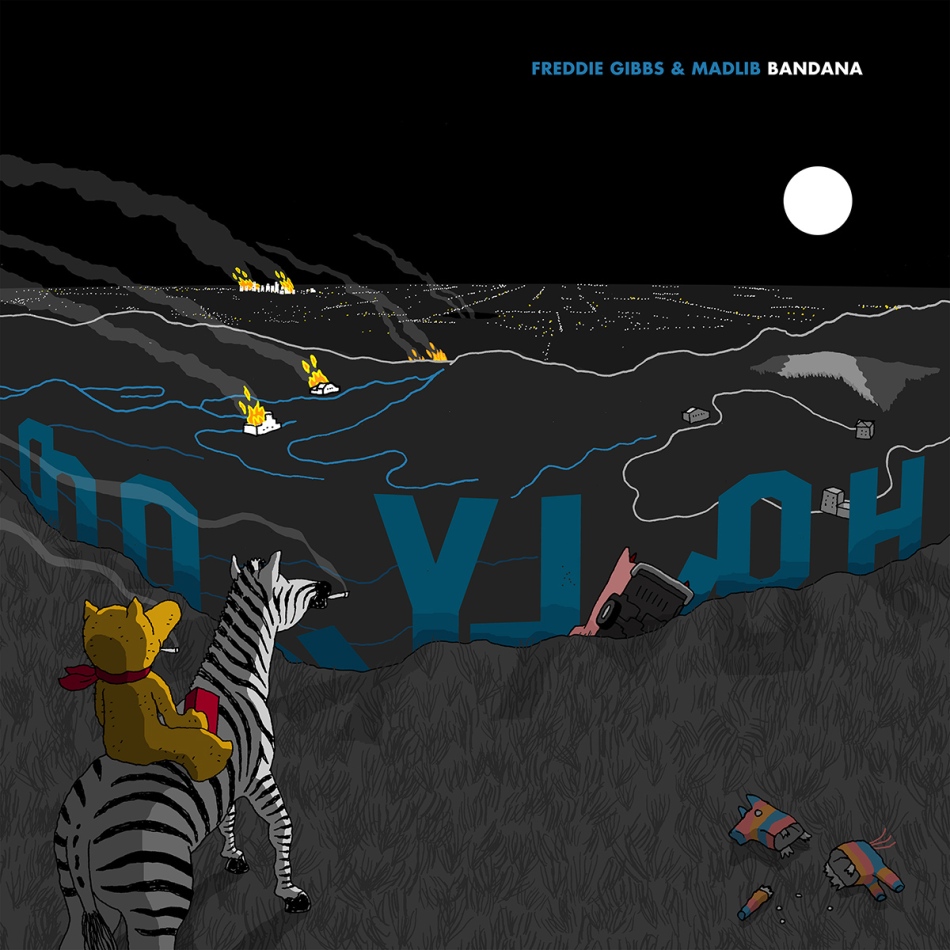 Back in 2014 when Madlib and Freddie Gibbs announced their now classic Piñata, I was intrigued. I had known Freddie Gibbs to rap about the streets under such different production that I didn’t know if they would pull it off. They ended up releasing a modern day classic, a smooth, soulful and confident, cool hip-hop containing some of my favourite ever Madlib beats and Freddie Gibbs raps. Since then, they have been teasing a follow up album titled Bandana, but it wasn’t until this month that they announced it officially. Listening it to it a few times already, it’s safe to say that they are 2 for 2 with albums, and this new project of theirs displays a sense of creative freedom that I haven’t heard much of in recent years.

Starting with a hilarious Japanese language skit on “Obrigado,” the album starts off with soul on “Freestyle S**t,” but this hardly sets the tone of the album. Sounds are diverse and Madlib pushes himself into new territory throughout this album. A trap beat on “Half Manne Half Cocaine”? I’ve never heard Madlib experiment with trap sounds, so it came as a surprise to me, but the beat grew on me and the switch was incredible. The bliss of “Crime Pays” is one of the highlights on the album, with Freddie Gibbs’ braggadocio and humorous raps making the track a memorable one. The dancehall sample on “Massage Seats” was prime Madlib in terms of genius sampling. The incredible soul sample on “Palmolive,” “Practice” and “Soul Right” are perfect additions to the overall aura and character of this album, and again shows Madlib pushing different sounds on this album.

As far as rapping goes – elite. Freddie’s flow is among the best in the game, hands down. Talking about street life, crime life as well as throwing shots at Jeezy, Freddie Gibbs’ wordplay is also stellar throughout. There are less features on this album than on Piñata, but everyone kills it. Killer Mike’s hook on “Palmolive” sounds mean, and Pusha T’s verse on the same track made me go back and re-listen to it again, and again, and again. Anderson .Paak kills every feature so it was unsurprising hearing him own the hook on “Giannis,” while Most Def and Black Thought kills their features on “Education.” Creative freedom and a raw approach to making music is what makes Bandana a stellar album that makes it a great follow up to their 2014 classic. Big ups to both Freddie Gibbs & Madlib for this one, and I’m looking forward to seeing them continue to grow, and for their London show at the O2 Kentish Town on the 26th October!

Listen to Madlib and Freddie Gibbs’ new album Bandana below via Spotify and don’t forget to support! Released via Keep Cool/RCA Records.