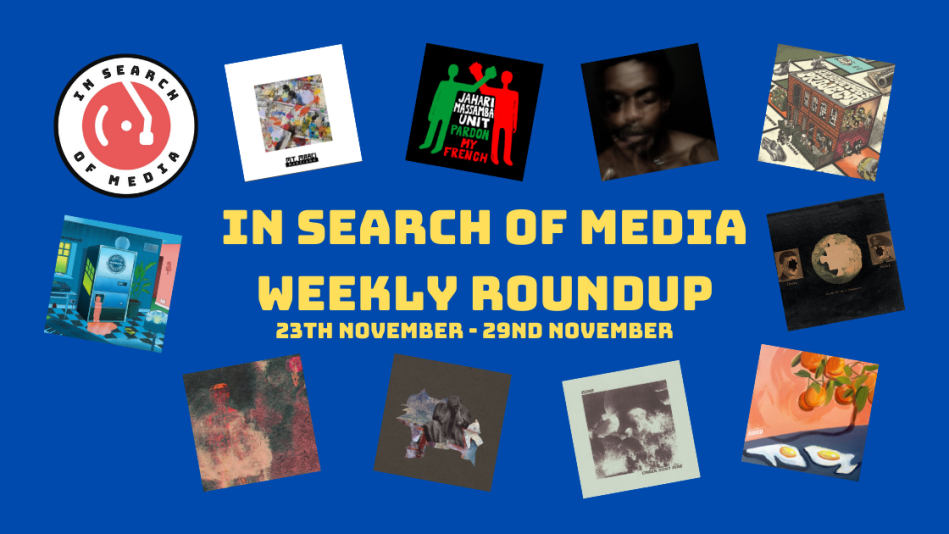 Hey everyone, hope you’re all having a nice Sunday and a decent week! It’s been a pretty decent week for music, quite a few releases I’ve enjoyed, so without further ado, let’s get into it!

My rapper of the last decade Roc Marciano has started the 20s with another phenomenal release titled Mt. Marci. I’ve run out of superlatives to describe his music and his incredible impact on hip-hop in general. It’s been an album I have been anticipating for a while now, and with limited release on his website (it’s still not available on streaming services at time of writing), it was an album I was intrigued to listen to and digest. As with most of his solo work, the project is almost entirely self-produced, with additional production from Jake One and Chuck Strangers. It is a smooth and intricate project, with soulful samples, subtle beats and an emphasis on rich aesthetics throughout. With every Roc Marciano release, I’ve got to sit down and digest for days and days, so there’s going to be a lot of lyrics I would have missed, which makes it even more exciting to delve into. Mt. Marci is a bold and poignant release with production that sounds moody and cinematic for the most part. As a solo album this is one of his most complete projects to date, and I can’t wait to re-listen to it on repeat for the next few months. Read more

The genius of Madlib and Karriem Riggins is displayed in full yet again. The two legends have come through as Jahari Masamba Unit to release a spiritual jazz album titled Pardon My French. With Madlib on the instrumentation and Karriem Riggins on the drums, both artists come together on a mesmeric, utterly spellbinding release that yet again showcases why they’re on of the most celebrated musicians of this generation. From the utterly beautiful “Un Bordeaux Pré-Phylloxéra (Pour Le Riche Enculé)” (the French theme runs through) to the groovy and infectiously funky “Merde (Basse-cour)”, both greats went for a sound that is equally energetic and rhythmic as it is reflective and spiritual. The tribal percussion on tracks like “Inestimable Le Clos” is just enthralling, and both artists really exceeded my expectations with a cohesive body of work that is truly incredible. Go support!

South-London based musician cktrl has come through with what I can only describe as a stunning and gorgeously emotive work of art titled robyn. The Lewisham-born artist is a unique talent, bringing ambitious, clarinet and saxophone-led compositions to life with a stunning sound. The 6 track project features 2 vinyl exclusives (tracks I’m yet to hear – I need that vinyl soon though) and incredible soundscapes that perfectly capture the playfulness and heart of cktrl’s aura. The strings and emotions built on “robyn” are just so beautiful, with mesmeric saxophone-led melodies backed by gorgeous piano arrangements. Ib Kamara, Duval Timothy, Coby Sey and Purple Ferdinand all contribute to this stunning body of work (Google their names ASAP) and they bring another musical dimension to the music. The 7-minute stunner “will the feelings leave” is a gorgeous track full of heart and soul, while the beat and groove of “as you are” is incredible to me. The aura around this project is what makes it such an incredible one, and I only wish cktrl more success in the future. Go support!

The Silhouettes Project is a community project comprising of collaborations with some of the most exciting and talented UK-based artists. The compilation features contributions from the likes of Bel Cobain, Lex Amor, Manik MC, Louis The Hippy, Natty Wylah Eerf Evil, Stephanie Santiago, Kieron Boothe among many others. Tracks like “At the Bay” produced by illiterate with Bel Cobain and Lex Amor is an exceptional way to open this release up, and tracks like the Purple Cloud- produced “What U Need” with KeepVibesNear & Nix Northwest and the Paya & Kosher-produced “Standin There” with Pedro Retro and Meron T are examples of the infectious grooves and ethereal tones this project brings as a whole. It’s a cohesive body of work that captures the aura of the UK sound perfectly. Go support!

Oliver the 2nd’s influence on the independent hip-hop scene in the US is undeniable. His sound over the last decade or so has stayed with me personally, so I was psyched to hear he was coming out with a new project. It’s titled Lingua Franca and features 7 tracks of some of the grooviest, jazziest and intricate tracks I’ve heard this month. Oliver the 2nd’s introspective and reflective verses are complemented by incredible production from Cohenbeats, who is credited on all the beats on this project (go check him out as well, incredible producer). “Work Mode” featuring Denmark Vessey is and exceptional opener, as both rappers flow effortlessly over the soulful cut. “Products” is exceptional as well, and Pink Siifu’s hook on “Let Me Explain” is perfect for that beat. Oliver the 2nd’s flows and intricate lyricism throughout is what makes this project tick though. He brings it together in a beautiful body of work that is just such a joy to listen to. Go support this one!

Detroit hip-hop maestro ZelooperZ has come through with a brand new project titled Valley Of Life along with talented producers Dilip and Matrax. upon first listen, I found this project to be thoroughly enjoyable, with dynamic, bass-heavy production and funny, engaging and entertaining verses from ZelooperZ, who never fails to impress with his idiosyncratic vocal performance and humorous lyricism. Tracks like “World 2 U” and “Woozy” feature some colourful production that embodies his humour and style effortlessly. The album closes out strong. “Just me” and “Snowing” featuring nak are my favourites on the entire project. Both are soulful cuts that features some introspective verses that again, make for engaging listens. It’s a good project to get into if you’re unfamiliar with his style, and one that further cement ZelooperZ as one of the most forward-thinking artists of this current generation of independent musicians.

Wisconsin producer and emcee Echo has come through with a stellar project titled Creek Don’t Rise. The intricate and soulful arrangements throughout the 13 tracks are just so beautiful, giving both Echo and the features throughout the project a gorgeous, reflective and mesmeric soundscape to rap over. “Boxcars” featuring Amir Bilal is one of my favourite tracks on the project, just due to the incredible sample loop and Amir’s stellar verse. “Safeties Deep” is a dark and introspective track, capturing a sense of urgency that sounds oddly hypnotic and just incredible throughout. The suffocating beat on “OhMy (Siren)” is crazy, while “Spurs” featuring Young Q is another lyrically poignant track with more crazy production, capturing Echo’s talents as a producer in particular, and the grandiose closer “Discus” is amazing as well. Overall a terrific project and one to check out and support!

LA producer SAMPLE has released a quality EP titled EuroStep Vol. 1. Heavy beats, crazy samples and a frantic, infectious energy that is just crazy throughout. The chopped up sample on “Fresh Prints” is crazy, while the groove and melody on “James Hardens Euro Step” is fantastic as well. The vocals on “Hiddenscrolls3”, coupled with the hard-hitting beat is phenomenal, while the chopped up samples and crazy arrangements on “Eye Contact” are just so dope. The project closes with the guitar-led groove of “Softball Pitches”, a dynamic and bass-heavy beat that again highlights SAMPLE’s diversity as a producer. Definitely go check this project out!

Swedish producer Blameful Isles has come through with a fantastic new EP titled Opera Omnia that acts as a continuation of full length project Chimerical that came out earlier this year. This is my first introduction to the talented producer, and I’m immediately drawn to the atmospheric, stunningly beautiful landscapes, Aphex Twin-like electronic compositions and the overall enthralling sound. The moody, eerieness of “Sleep Bell” featuring Borealism is quite stunning, and the energy on tracks like “Umi’s” and “Blade Dancer” are exceptional, with energetic and rhythmic compositions that feel robotic and futuristic. “Kindled” has this enchanting, synth-led melody that feels organic and sounds sublime, while the beauty and animated “Cleyra” closes the project out beautifully. It’s a pretty impressive project that perfectly captures the aura and spirit of his artistry. Go support!

Swedish-based Max I Million and Texas-based Nocatchphraze have come through with a collaborative project titled Private Barrel Selection. Separately, the two hip-hop producers have released some stellar, soulful productions, and together they came together on this one with quite an incredible body of work. It’s hard-hitting, with heavy drums throughout, and synth melodies that are colourful and engaging. “ThinkYaBad” featuring Octavio N. Santos is an example of that hard-hitting and dynamic energy, with colourful synths and melodies that complement the heavy boom-bap drums throughout. The project as a whole features some pretty fantastic moments, such as the dance-centric grooves of “Wanna Disco” and the soulful, R&B inspired groove of “Couch Joint”. It’s an excellent body of work, and one I think everyone should check out. Go support!