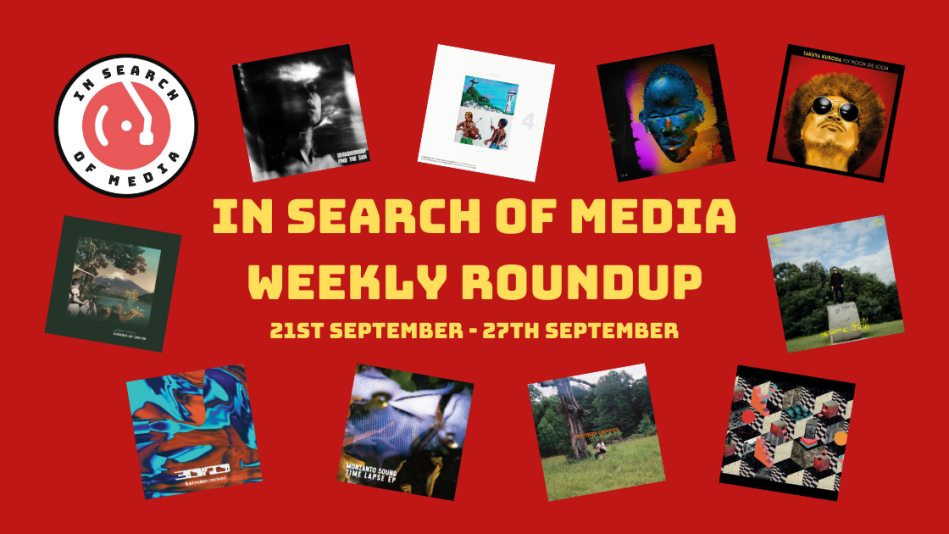 Hey everyone! Hope you’re all keeping well and safe. It was a busy and overwhelming week for me, but the weekend is here and there’s quite a few releases to dig into! Happy listening!

I never know exactly what to expect with a new Deradoorian album as her music tends to be vast and incredibly varied, so I was naturally excited to learn that she was releasing a new album. Find The Sun comprises of 10 gorgeously captivating tracks, meandering between Can-inspired guitar-led compositions and more ethereal, synth and vocal-led records that just bring such incredibly profound and infectious energy. It feels like a prog album, not only due to the length of the tracks themselves, but its seamless sequencing and pure experimental energy. Read more

Sango’s Da Rocinha album series have defined so much of this decade’s sound in terms of futuristic, hard-hitting beat music. The Brazilian sonic samples and the drumming throughout these albums are fun and energetic, and the 4th album in this series is nothing short of incredible. His openers have always been crazy, and “Detalhe” is no different. The textures and layers throughout the entire album are absolutely stunning, such a s the rhythms and grooves of “Maio” featuring Neguim and “Espírito Santo”featuring Hagan. The incredibly lush textures and synth leads on the latter track especially are just so smooth and so soulful. The tribal, hypnotic tone of tracks like “Cangaíba to 7 Mile” and “Rocinha to King Drive” make this a varied, fun and exciting new project that continues to cement Sango’s position as one of the trailblazers and iconic musicians of this new trap-influenced production sound that has dominated music production for the last decade or so. So definitely go check this one out and support!

SAMO, the collaborative project between London-based artists Shumba Maasai and Hermes is here and it’s absolutely crazy. TOKTO II is a short, 4-track project of some of the hardest, eerie yet spiritual tracks I’ve heard in a while. Shumba Maasai’s presence on the mic is mesmeric, as his confidence and dominant delivery is something I have been a fan of since discovering his music a few years ago. He wears his Zimbabwean roots and influences on his sleeve, with tribal and crazy rhythms throughout that just sound so good. “Rudeboi” kicks the project off with a menacing tone, with a dark, driving instrumental that carries the energy of the track, and Shumba’s flow is smooth and confident. This track flows perfectly into “Kick Back”, a more trap influenced record that carries this harsh, hard-hitting energy that hits so damn hard. The moody and tribal “Remedy” is beautiful as well, while “Pressure” with Afronaut Zu is soulful, spiritual and utterly mesmeric. Zu’s vocals are stunning, and for those who don’t know, get yourself familiar with his music. Overall, this project is phenomenal and continues to cement Shumba Maasai’s legacy as one of the most innovative artists of his time. Go support!

Japanese trumpeter Takuya Kuroda has released a spellbinding new project titled Fly Moon Die Soon. The 9 track project features some of the most angelic, soothing and beautiful jazz music I’ve heard all month, with stunningly beautiful and textured compositions that feature incredible horn sections, incredible grooves and rhythmic drumming throughout. The incredible guitar-led groove of “ABC” instantly hits, with a funky, rhythmic and energetic track that perfectly captures the funkier side to his music. “Change” is a soulful and trumpet-led track that features some incredible drumming and groovy basslines. “Moody” is another highly energetic and textured track, with crazy rhythms that just sound so dynamic and so infectiously groovy. His ability to create dynamic, textured and rhythmic and highly infectious music is what makes this album such an amazing one. Definitely go listen and support!

Horatio Luna is part of the ever-growing exciting music scene in Melbourne, Australia. He has released some of the grooviest music over the past few years with 30/70 and through his solo work, and this new project Boom Boom is equally as impressive. A more dance-oriented release, the grooves and beats on this are higher in tempo and energy, as incredible basslines and lavish synth-keys meander throughout the spacious, gorgeous soundscapes. The title track kicks the album off with thick basslines, a dynamic beat and keys that sound soulful and wonderfully composed. This energy is pretty much carried throughout the 7 track album. “Fuck The System” is groovy, with incredible verses and flows from Willy Dynamo and Thamson P. Horatio’s bass and guitar work throughout is just flawless. “No Words, Big Party” is an example of this, while “Bush Doof” is one of the funkiest and heaviest records I’ve heard in a while. The project as a whole is incredible, and showcases the extent of Horatio Luna’s talents as a bassist, guitarist and composer. What a project!

On The Corner – Door to the Cosmos

On The Corner Records have been for the last 5 years or so, established themselves as one of the most exciting labels. With tribal, percussive and drum-heavy releases, the music on the label represents a wide range of influences and sounds that span from jazz to house, and from traditional African music to hip-hop. Door to the Cosmos is exactly the type of compilation you’d expect it to be – spiritual, rhythmic and soulful. The 25-track compilation features an extensive array of tracks that are potent and utterly beautiful. From Khalab’s incredible “sorry” to Ariwo’s playful and melodic “Flameback Dance” the compilation is full of dynamic and melodic moments. The crazy, jazzy and spiritual tone of African Science’s remix of Collocutor’s “Lost and Found” is another incredible track.

Soul musician Grimm Lynn has released a brand new project titled Southern Grooves. This is my first time listening to the talented musician, and I was immediately drawn to the incredibly lush and rhythmic production throughout the 8 tracks. It kicks off with the sweet and soulful “Suga Cane” featuring Flwr Chyld, a gorgeously soulful and funky track with gorgeous synths and a beautiful vocal performance that perfectly captures the soul and aura of his music. “Golden Hours & Southern Dusk” Kis another stellar moment on the project, with a smooth and synth-heavy track that features funky basslines and guitar leads. “Cruise Control” is another moody and melodic track I love on the project, while “Southern Grooves” closes the album out with a gorgeous, angelic and beautifully textured track with incredibly smooth vocals throughout.

London-based neo-soul and funk group Monzanto Sound have come through with a brand new 5-track EP titled Time Lapse. Throughout these tracks, the group is able to navigate through a soundscape of incredible drumming, synth-leads and percussion that captures a raw and incredibly smooth energy. The basslines on the opening track “23” are incredible, while the vocals on “Lead The Way” are sublime. The musicianship and chemistry between each band member is at 100 throughout the entire project. Each element, sound, groove and beat fits perfectly with one another, as each member brings their own personality to the project. “We Are Strangers” is another excellent track that captures these exact grooves and energies. It’s an excellent release and one definitely worth supporting!

Melbourne-based soul group 30/70 released one of my favourite albums last year in Fluid Motion. Groovy, absolutely infectious and beautifully produced, the album was a true highlight for me, and I was properly gassed to learn they had a remix project coming out, especially considering some of the names on the project. The 5-track remix EP features incredible remixes from SAUL, Athlete Whippet, Close Counters, Setwun and Maxwell Owin. All these talented artists brought soulful, dynamic and groovy dance remixes that perfectly capture the aura and DNA of the group’s eclectic and soulful sound. Maxwell Owin’s remix of “Tempted” is my favourite on the project, with and incredibly atmospheric and poignant groove and 2-step beat that once again shows why Max is one of the illest producers period. The EP is great and you should definitely check it out!

Melbourne-based beatmaker Jonny Faith has come through with a stellar new project titled Garden of Zen. The 6 track project features colourful rhythms and warm basslines that capture a colourful, beautiful aesthetic that sounds soulful and hypnotic. From the opener “Mange Tout” to the jazzy closer “Nap Time”, this project features some stellar melodies and rhythms that are beautifully textured and provide a soothing quality. It’s definitely a project to check out and get immersed into, the rhythms and beats on here are so beautiful and lush!