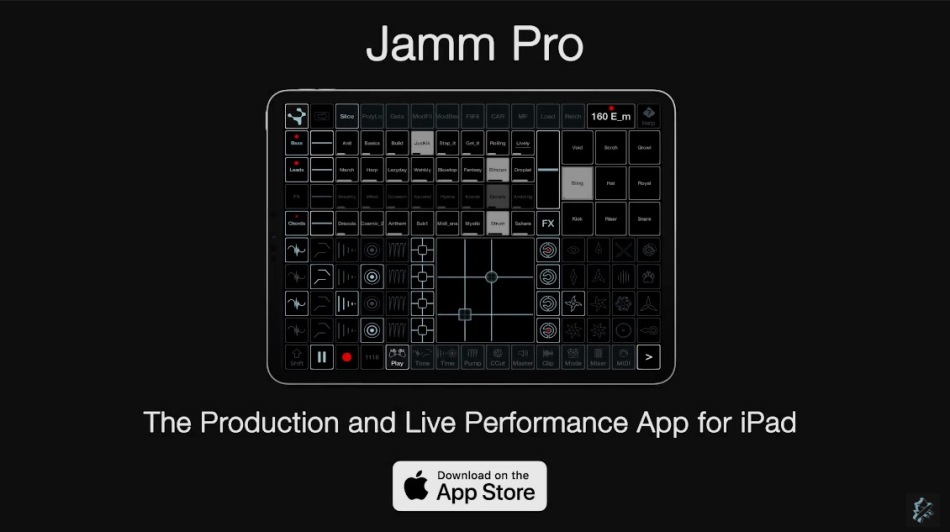 On the 13th February, leading independent music label Ninja Tune and electronic music pioneers Coldcut released their highly anticipated follow-up application for the iPad, Jamm Pro. I was lucky enough to sit with Ninja Tune founder and Coldcut member Matt Black for an exclusive demo, and was immediately impressed by the functionality and the story behind the application. For those of you who know already, I’m no musician, so on the technical side I won’t be able to fully articulate the features and why I find them amazing, but I’ll tell you this – from a user experience perspective, Jamm Pro feels quick, slick, intelligent and perfect for experimentation.

Matt explained that Jamm Pro has been 25 years in the making. He explains how the idea for the application was somewhat inspired by old school hip-hop DJs who used to scratch and sample different sounds to great effect in their DJ sets. He wanted to create something that centralizes all functions into a user-friendly interface that pretty much gives you full freedom and control over each sound, sample or idea you would want to record or play. Acting as a sequel to Ninja Jamm, Jamm Pro focuses on real-time experimentation and lets the user share and record ideas separately, often used for playing live and DJing. It features extensive modulation and patching capabilities, similar to a modular synth. You can upload all of your samples as Sound Sets, and after playing around with the arrangements, they can be easily saved as patches. It is equipped with four main channels, each of them with nine different sequences, and has up to 64 patches. This allows Jamm Pro users to initiate 2304 sequencers per Sound Sets. The intuitive multi-touch control, the app can facilitate direct engagement by tracking small finger movements that have quite the effect on each sound you want to play around with. Seeing Matt use it with such ease is striking to me, and as far as the interface itself – it’s clear and concise, so you’ll be able to learn about each functionality rather quickly.

As for the features themselves, they are plentiful. There is multitrack recording, transforming Jamm Pro into a proper recording tool, saving with all channels individually recorded. The Inter-App Audio feature gives you the ability to connect and record in from existing drum machines and synth apps. This means that users would have a full studio set-up with Jamm Pro in the center. The Coldcutter module enables buffer shuffle and modulation matrix for intricate beat manipulation. Furthermore, features such as Sub-bass modules, direct MIDI input, multi-touch tip control and a scratch functionality makes Jamm Pro an exciting new application to use. Seeing how passionate and knowledgeable Matt was on the topic really encourages me to actually start making music.

Overall, Jamm Pro is a major step forward from its predecessor, with more intuitive features and design that perfectly capture the essence of live experimentation in music. If you’ve got an iPad, this is a must get, and is an exciting step forward for intuitive, music-making software. Read more about Jamm Pro here.