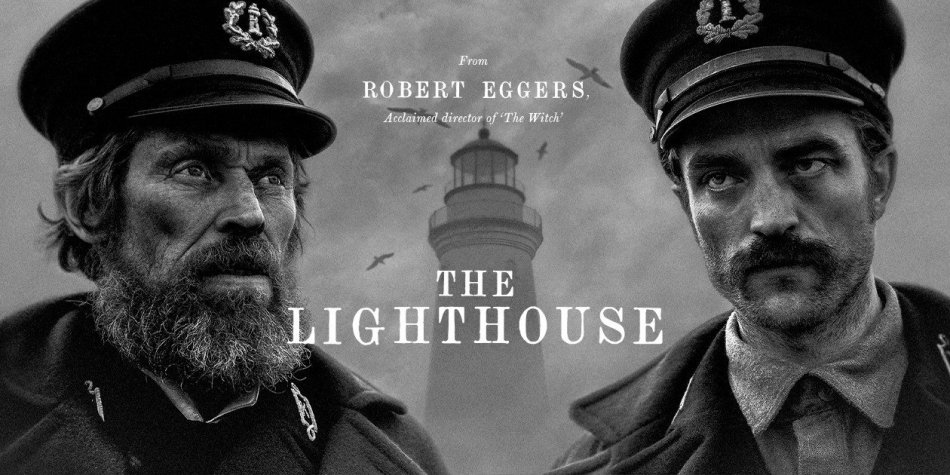 Few films have left me as stunned and speechless as Robert Eggers’ second feature film The Lighthouse. It defies categorization. Eggers’ first film The Witch was already a monumental feat in the horror genre since its release in 2015. The 17th century New England setting made for an eerie and utterly captivating film that tackled everything from family loyalty to the dark, evil and ritualistic practices of a family. It was one of the best films of 2015, and I recommend you watch that one first before watching The Lighthouse, because trust me, this film is not an easy watch.

SPOILERS AHEAD [There is no direct storyline to this film other than the fact that there are two wikies (lighthouse keepers) who spend four weeks on a contract job on this remote, isolated and dark island towered by a massive lighthouse. Ephraim Winslow (portrayed by the alluring and charismatic Robert Pattinson) is the main protagonist of the story, a relatively young and stubborn ex-lumberjack who worked in rural North Canada. He is under supervision by Thomas Wake (portrayed by the legendary Willem Dafoe). As both men were going to be by themselves for an entire month, their sanity was tested through thick and thin. There were frequent rifts between Winslow and Wake, who set differences aside over alcohol. Wake demanded Winslow to take more take the more taxing jobs—refueling the light, carrying heavy kerosene containers, and disposing of the two men’s chamber pots. Winslow was not happy with doing all the heavy work, and became increasingly curious about the lighthouse itself, something Wake kept away from him. Winslow’s hallucinations/dreams deepened and intensified as the film progressed, with reccurring images of tree stumps in the water, tentacles in the lighthouse and a mermaid (portrayed by Valeriia Karamän). The night before they were meant to leave the island, a brutal storm hit and the ferry never came to shore. The two men tried their best to endure the storm and each others company, but Winslow began to lose control. His frustrations with Wake kept growing, insisting on learning about the lantern room at the top of the lighthouse. He reveals that his real name is Thomas Howard and that he assumed the identity of Ephraim Winslow, his foreman who died in an accident he could not stop. Wake accused Winslow of admitting murder and both men started to fight under the influence of alcohol. Winslow finally killed Wake with an axe, (which references his experience as a lumberjack) and stole his keys to the very top of the lighthouse. After making it, seemingly under the influence of alcohol, he opened the Fresnel lens and stared at it in a hypnotic tone, letting out demonic screams before falling. The final scene is him being eaten by crows by the shore of the island]. SPOILERS END HERE

This film was all sorts of confusing. The dialogue at times was barely understandable, which was mainly due to Wake’s thick Irish accent. This made some of the film difficult to follow. The acting was absolutely flawless. I’ve been a big fan of Robert Pattinson for a few years now, so it was no surprise that his performance was emotive, bold and flawlessly portrayed a man who was falling deeper and deeper into insanity. Willem Dafoe,’s performance was frighteningly good as well, but I’ve come to expect that level from the legendary actor. The cinematography was stunning. The film is in black-and-white, shot with a 1.19:1 aspect ratio. This engulfed me fully into their stories, immersing myself deeply in the characters and their troubles. The soundtrack, composed by Mark Korven is eerie and builds up tension so brilliantly. The constant booming foghorn sounds engulf the mood of the film entirely, creating a deep sense of urgency and fear. It’s a claustrophobic film, an anxious and often frightening visual experience that plays around with different camera angles and shots perfectly. As for the themes of the film, shit… I need more time and a second viewing to fully grasp some of the themes and sequences. The gulls that appear throughout represent a dark and evil energy. According to Wake, it is bad luck to kill a gull, revealing that he is superstitious that the gulls are reincarnated sailors. Bad karma hits Winslow after ripping and breaking a gull to death. Themes of god and worship also come up in the film in many different ways, as personified in my opinion by the gulls and the mysterious mermaid throughout the film. Thinking about it, Wake could also be personified as god, a towering and dominant figure who holds the only keys to the top of the lighthouse. The scene that defined this thought for me was one where Wake tries to convince Winslow that everything he sees around him is just a figment of his imagination. Whether this is true or not is open for interpretation, but it is a fascinating theory that adds to the depth and complexity of the film.

Robert Eggers is able to capture claustrophobia, alienation and descent into madness perfectly in a film that feels timeless and essential. The Lighthouse is an experience I will never forget, and a film I am bound to watch again for the thematic subtleties and towering performances.

The film will be released in UK cinemas on the 31st January 2020. Watch the trailer below. Distributed by A24.

1 comment on “Claustrophobic, manic and stunning, The Lighthouse is a wild, eclectic and utterly haunting film experience”