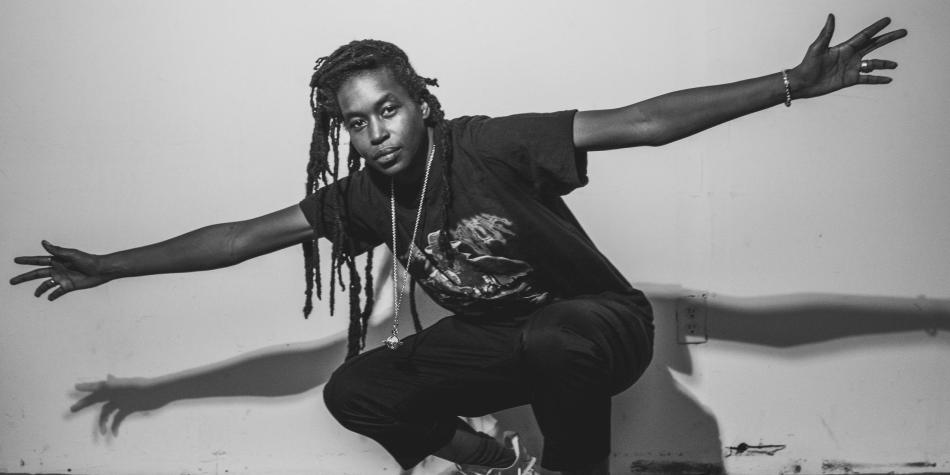 Camae Ayewa, aka Moor Mother, has over the past five years or so, released some of the most arresting, striking and important music of this generation. As a solo artist, the Philadelphia-based artist has made some of most disorienting, eclectic hip-hop and electronic albums I’ve listened to recently. From her 2016 debut solo album titled Fetish Bones to her 2019 masterpiece Analog Fluids Of Sonic Black Holes, she is able to channel punk-like energy with a sense of urgency, demanding attention with every word and sentence she articulates. Black empowerment is a major theme in her music, drawing inspiration from her own experiences and those around her. As the co-founder of Black Quantum Futurism, a multidisciplinary collaboration between herself and Rasheedah Phillips, she’s been able to create a space that encourages the exploration of personal, cultural, familial, and communal cycles of experience through different creative mediums, with a specific focus on Black/African cultural traditions. It is an extension of her artistry, and has been able to curate some important events and contribute to projects that empower Black people globally.

This year, her growth and musical output has reached new heights. It may also be because this was the year I was fully introduced to her incredibly varied and expansive discography, but two release an incredible solo record (Black Encyclopedia of the Air), a classic collaboration (albeit being released late last year) with one of the most enigmatic poets of this generation in billy woods titled BRASS and being central to one of the most striking jazz albums with Irreversible Entaglements in Open the Gates, it’s imperative we give her her flowers while she’s still creating. What’s amazing is that all three albums she has directly been involved with sound so different and serve a different purpose. Black Encyclopedia of the Air, as she describes it, is more of an accessible project, as she tries to convince those unfamiliar or scared of her work. With contributions from the likes of ELUCID, Pink Siifu, Brother May, Nappy Nina, Maasai and Black Quantum Futurism, she crafted a diverse and eclectic soundscape with stories and poem studying multigenerational trauma, Black and female struggles, with reference to contemporary socio-economic and political struggles that are still relevant to this day. With production inspired by electronic soundscapes and hip-hop beats, the album sounds dark and desolate, but full of life. It’s an extraordinary album that ranks to me as one of her best to date.

Her vocal contributions and poetry on her flawless collaboration with billy woods titled BRASS stands to me as her most impressive to date. Ther percussion and overall soundscape on the album sounds tribal and raw, with production handled by the likes of The Alchemist, Preservation, Moor Mother, Olof Melander, Child Actor, Navy Blue, Messiah Muzik, Steel Tipped Dove, and Willie Green. Her flows and verse on “Arkeology” featuring ELUCID is among my favourites of this year, as she references Toni Morrison’s litarary classic Beloved, a novel about Sethe, a former slave, who is still trying to unshakle herself from the trauma of her past in a house haunted by past horrors. The Moor Mother articulates some of the lines here is truly chilling, as she is able to channel the pain felt by Black women who have had to confront the traumas of their past, as well as the institutional racism that has haunted her and millions of others, not only in the States, but around the world. Her angst and anger feels urgent and almost desperate, not only on this track, but the album as a whole. The chemistry she has with billy woods is just perfect. woods is pretty much a historian, delving deep into themes of African colonialism and slavery, while Moor Mother’s presence provides a well needed balance, as themes of womanhood and female struggle is put into perspective so perfectly. And with some of the darkest and most disorienting production I’ve heard this year (with tracks like “Rock Cried” and “Blak Forrest” featuring Fielded), this for me makes it one of the most fascinating and challenging (in a good way) hip-hop albums I’ve listened to in quite a while.

The rumblings and percussion on the opening two minutes of Irreversible Entanglement’s sublime album Open the Gates sets the tone for an dense, intertwining and provocative body of work, with incredible jazz improvisations that are powerful and evoke feelings of angst yet optimism. “Energy time”, Moor Mother (performing as Camae Ayewa) proclaims triumphantly on “Open the Gates”, with syncopated drumming and synth leads that perfectly capture the frantic energy of their music. The lengthy, swirling and unpredictable compositions are truly breathtaking, and listening to it requires full attention. It’s an album that requires you to be in the moment, in the present, listening to every single detail, every word, every change in tempo and melody. The intense horms and rhythmic drumming on “Lágrimas Del Mar” are truly breathtaking, as Camae says “I’m so close to the good news”, a triumphant track that is powerful in its message and composition alone. “Water Meditation” feels like an album within itself, a 20-minute masterpiece, with swirling horns and percussion, as well as rumbling basslines and drumming that build in intensity throughout the track. It’s an exceptional moment that builds and quietens, with both an intensity and a calming meditative feeling of peace that is all brought together by the guidance and calming, reassuring voice of Camae, who’s presence on this album is so important to not only the overall message of the album, but also the overall tone and aura of it. It’s a true masterpiece, and one that truly captures Camae’s incredibly beautiful and powerful artistic aura.

These three projects could not be any more different, yet Moor Mother’s presence is what makes them such valuable pieces of art. Along with a plethora of features and other creative endeavors, both this year and the last few years, Moor Mother has established herself as one of the most forward-thinking and important voices of this generation, creating timeless music that feels dark and unnerving, yet with so much beauty and soul to it. I guess for me personally, it’s her aura and her delivery on these densely produced, eclectic compositions that make me feel utterly in awe of her music. To an even brighter and more successful 2022!