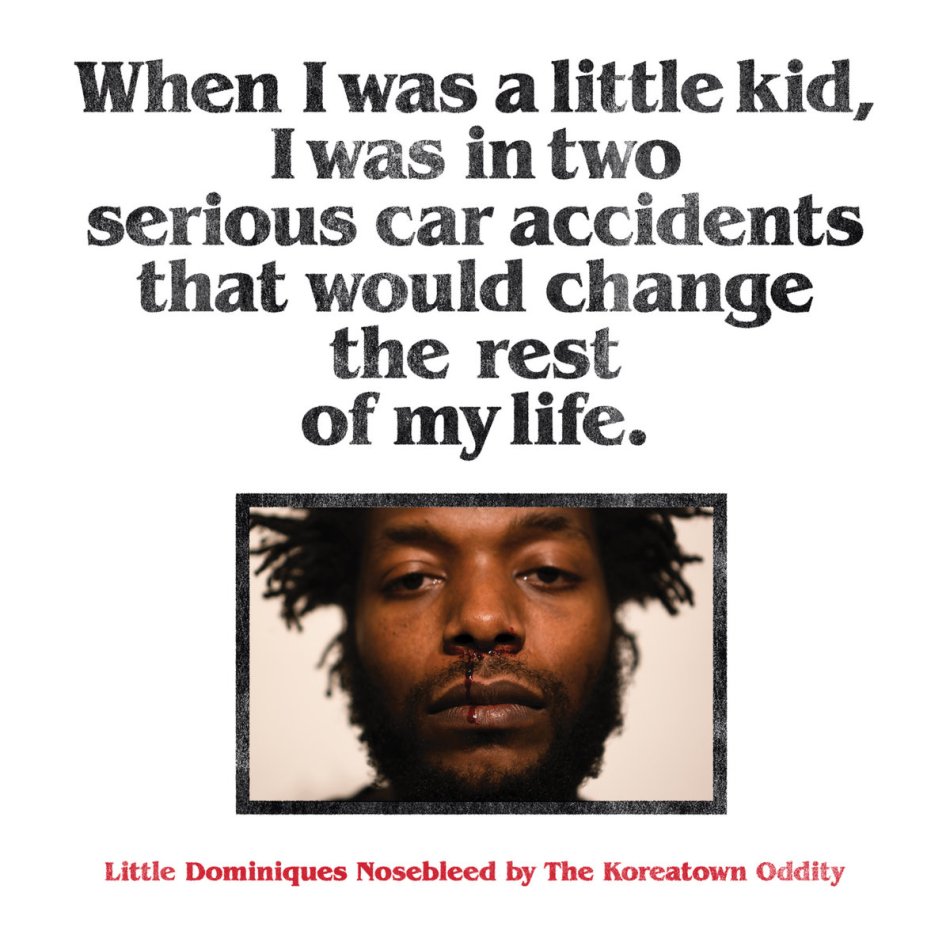 For about a decade, Dominique Purdy, aka The Koreatown Oddity has established himself as one of the most unique and versatile hip-hop artists within the LA music scene. On his brand new album Little Dominiques Nosebleed, the talented artist tackles the origin story to his “supernatural powers and spiritual awakening” that came from two separate car accidents from his childhood that happened while growing up in Los Angeles’ Koreatown District. The first accident happened when he was 5 years old, when he ruptured a vessel in his nose. That gave him frequent nosebleeds, also needing to frequent the hospital regularly. The second accident left him with a broken leg and worsened his nosebleeds. All of these experiences and traumas have given Dominique a new, more spiritually aware attitude towards life, and on his new album he is able to capture all his thoughts and feelings in eclectic, colourful and incredibly cohesive 16 album that captures his humour and abilities perfectly.

I’ll be honest, as soon as the opening track “Looking Back from the Future” I knew this album was going to be phenomenal. In one of my favourite opening verses of the year, Dominique says “Looking back to understand where I’m at / Moving forward through the corridor of becoming detached / Even in an avalanche of some fabricated trash / The undisputed truth always gets the last laugh / That’s why you see spirits that resemble shattered glass / That’s why the future of the world can’t be left in fragile hands / That’s why when you gifted you don’t even need to brag, or act like you better than anybody on God’s green land.” It’s a lot to digest but he says it with such poetic clarity that it’s just absolutely incredible to listen to. The energy is insane, and with the soulful vocal performances from both Baby Rose and C.S Armstrong, this is an incredible opener to a dense and incredible album. On “Little Dominiques Nosebleed, Pt. 1” featuring Sudan Archives, he tells the story of the first accident, vividly telling it from his perspective. With two distinct beats reflecting the one of two different instances (pre-accident and post-accident), the tone of this track as a whole in unnerving and unsettling. “Little Dominiques Nosebleed, Pt. 2” tells the story of his second accident, over this frantic, cacophonous horn-heavy track that is equally as anxiety-ridden as “Pt. 1.” The way he is able to animate and capture the mood and tone of these two tracks along just shows me how great of a storyteller he really is. “A Bitch Once Told Me” featuring Ahwlee is another highlight on the album, with its soulful beat and humorous refrain – “A bitch once told me like ain’t that deep, I think I’m gonna have to agree to disagree.” “Attention Challenges” is a fascinating track featuring Swift, Skyler Duf, Fatlip, Subtitle, Nita Darling, and Corrine Atkinson. They come up with absurd and funny things people do to get attention, and it plays into the deeper meaning of the album around finding purpose and spirituality despite this unhealthy obsession with seeking attention. The lead single “Kimchi” is another autobiographical track about his experiences growing up in Koreatown, LA. “The World’s Smallest Violin” featuring Jimetta Rose and Corrine Atkinson is a soulful moment on the album, while “We All Want Something” featuring Anna Wise is absolutely stunning, ethereal and gentle track that acts as the spiritual centrepiece of the album. After all the emotion and intensity of the album up until this point, it’s refreshing having uplifting and beautiful tracks like “Lap of Luxury” featuring Qu’ ran Shaheed and Kintaro, and the quirky “Little Dominiques Nosebleed Outro.” The former track features lyrics like “Happiness within and you get what you give,” as well as other uplifting, positive messages of reassurance.

Artistically, The Koreatown Oddity has grown tremendously since his last album, creating an introspective, personal and inspiring body of work that captures a heart and soul that is both infectious and captivating. His storytelling ability is phenomenal, and the way he is able to navigate his story so cohesively throughout a 16-track project is incredible. Little Dominiques Nosebleed is his most complete album to date. Go support him!