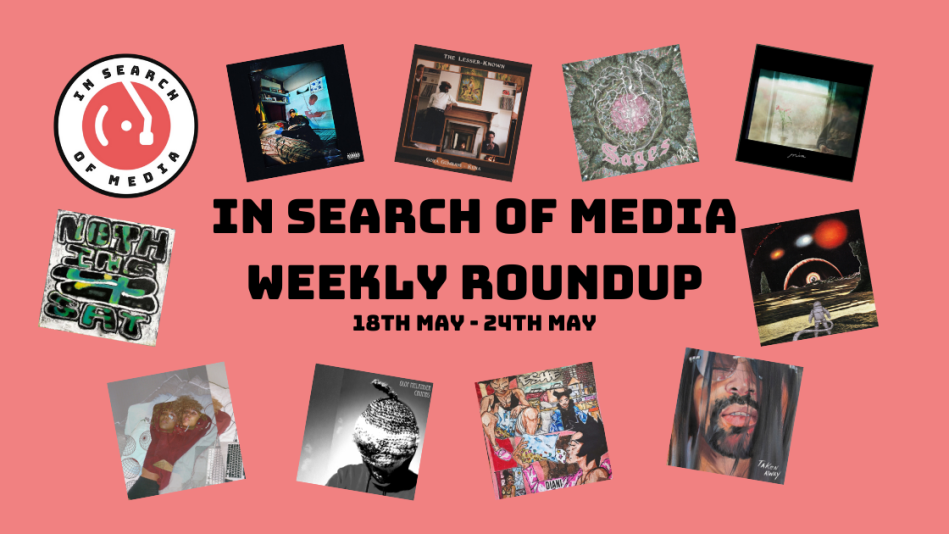 Happy Sunday everyone! Summer is fast approaching with a lot of exciting scheduled releases, and these past few weeks brought some great new music. Without further ado, let’s get into this week’s roundup!

With Almost An Adult, Jords has established himself as a true visionary. From his incredible short film highlighting themes of love, loss, personal growth and the black experience to a textured, self-reflecting and poetic album, the talented London-based rapper did not put his foot on the breaks one bit. The funny thing about the title to me is that it suggests that Jords hasn’t reached true adulthood due to the ongoing personal struggles he has had to deal with, that’s at least how I view it. But by the end of the album he sounds rejuvenated, even reborn as a man ready to tackle the next journey ahead of him. His growth throughout the album is what makes it such a fantastic listen and I hope he continues to strive for greatness because this is already a massive step in the right direction. Respect! Read more

The intimacy, soul and introspection of Goya Gumbani and Kiina’s The Lesser-Known makes it one of the more memorable projects of this year

I’ve seen Goya Gumbani’s growth for the past few years now, and I can confidently say that he has now released his best work to date. The Lesser-Known is a collaborative album with incredibly talented London-based Scottish producer Kiina. His beats are absolutely phenomenal, as he is able to create a soulful, textured and boom-bap inspired sound that gives Goya Gumbani an ethereal and dynamic soundscape to flow effortlessly and rap over. It’s an incredibly lush, textured and cohesive body of work that captures an ethereal, beautiful energy. Goya’s incredible lyricism combined with Kiina’s lavish production makes for a meditative and reflective listen. Both artists reach new creative heights with The Lesser-Known, and I only see them continuing to grow for years and years to come. Read more

Richmond, Virginia musicians and Mutant Academy members Henny L.O. and Ohbliv have released a fantastic collaborative album titled Sages. Produced entirely by Ohbliv himself, this 14-track project features some incredibly lush and soulful production from the legendary musician, with some stellar verses from Henny L.O. His cadence and delivery on the mic is phenomenal, with tracks like “Whatever U Need” and “Quincey Matthews” showcasing his incredible flow and lyricism, as his vivid imagery throughout this album really shines through. Features include Fly Anakin, Nickelus F and ANKHLEJOHN among others, and everyone brings their own personality and energy throughout. It’s a cohesive body of work that captures the spirit of the incredible Mutant Academy collective.

Dallas, Texas based artist Stephen Carmona comes through with a stellar 6-track EP titled mia. The guitar-driven project contains some soulful and textured compositions. The subtle guitar-leads on “best in mind” and “no control” are complemented by a hard-hitting beat, while the mesmeric and melodic composition on “sepia/daze” is one of the standout moments on the project for me. The idiosyncratic energy of “found” is also fantastic, and it just proves the extent of Stephen’s eclecticism as an artist. Overall, it’s a terrific body of work that gives us an insight into his creative space, paving way for even greater projects in the future. Keep it up!

Jabbu – Before The Sun Take Rest

Philadelphia-based producer Jabbu has released an interstellar new project titled Before The Sun Take Rest. With thumping, bass-heavy production, the eclectic beatmaker is able to capture a sound that is both textured, ethereal and futuristic. The 12-track album is full of mesmeric, synth-heavy moments such as “Porceletta” and “Mourning There, Goodnight Here” that provide a more reflective tone. It also includes heavier rhythms such as “Terraform” and “Practice What You Preach.” It’s a dynamic, interesting and forward-thinking electronic album that contains some fantastic grooves and rhythms. An album definitely worth your time, so go and support!

Detroit House legend Moodyman has released a stellar new album titled TAKEN AWAY | KDJ-49. Known for his incredibly soulful and bass-heavy compositions, the enigmatic producer has released an album full of engaging, catchy and utterly infectious grooves. “Do Wrong” kicks the album off incredibly, with a bluesy, soulful sample that contains a beat that drives the groove and the rhythm forward. The infectious funk on tracks like “Taken Away” and “Slow Down” are incredible and perfect for the dancefloor. The whole album is full of funky, masterful compositions, showcasing Moodyman’s talents as a producer. He’s one of the greatest House producers of his generation, and he continues to create bass-heavy, electronic dance compositions that are perfectly suited for dance-centric environments.

Brooklyn-based artist Diani has released a captivating 7-track project titled ESHE. This is my first introduction to the enigmatic rapper and singer, and I’m massively impressed by her intricate, introspective raps as she flows effortlessly over the eclectic and dynamic production (helped by the likes of Jay Versace, Elaquent, Juneayth, 88Keys, HokagePlug, Devonwho and Amani). The album is soulful, featuring beautiful keys and synth melodies throughout, giving Diani the opportunity to tell her story over incredibly lush and textured production. Her vocal performance is also impressive, showcasing the extent of her versatility as an artist. She’s a terrific artist with a whole lot of potential, so make sure you look out for her in the future!

Swedish producer Olof Melander aka iller the abstract giraffe has come through with an eclectic and mesmeric new album titled Crumb. I’ve been a fan of his work for a little while now, so I was naturally excited to listen to this one, and I wasn’t disappointed. With desolate soundscapes on tracks like “Sleeping Grounds” to the more dynamic, beat-centric sounds of “Bird Dust” and “Mirror,” the gifted artist is able to find a balance between eclectic and colourful & rhythmic. “Outside.jpg” is another highlight on the track, with a powerful spoken word piece by Moor Mother. Olof really exceeds expectations on this incredible body of work, and I look forward to hearing more albums from him.

Super talented artist Fousheé has released a short but sweet 3-track EP titled Relative Motion. The soulful, synth-heavy soundscape is delicate and ethereal, as her angelic voice complements the lavish and incredibly dreamy sound. “HAZY” is a slow-paced, stunningly beautiful track produced by iiye aka Pink Siifu, with incredible harps from ss.sylver. The beat on “WIND” (produced by voilé) is subtle, with dreamy and stunning vocals that capture her aua perfectly. “PILLOW,” produced by Lionmilk is an angelic and ethereal track with a more dominant groove. All three records contain different tones and energies that perfectly capture her beautiful and angelic aura. Fousheé is definitely an artist to look out for in the future!

What is there to say about MIKE that hasn’t been said yet? One of the most talented and accomplished underground hip-hop artists has released his first single titled “Nothin’ 2 Say (Never Forget)” off his highly anticipated new album Weight Of The World set to be released on the 21st June. Self produced under his dj blackpower name, it features an incredible looped Moraes Moreira soul sample. His vocal delivery is poignant, as he flows with intent and confidence throughout the track. The sample is so damn catchy I’ve had it in my head for the past few days, and his personal and introspective verse is incredible too. Cannot wait for his new album now!