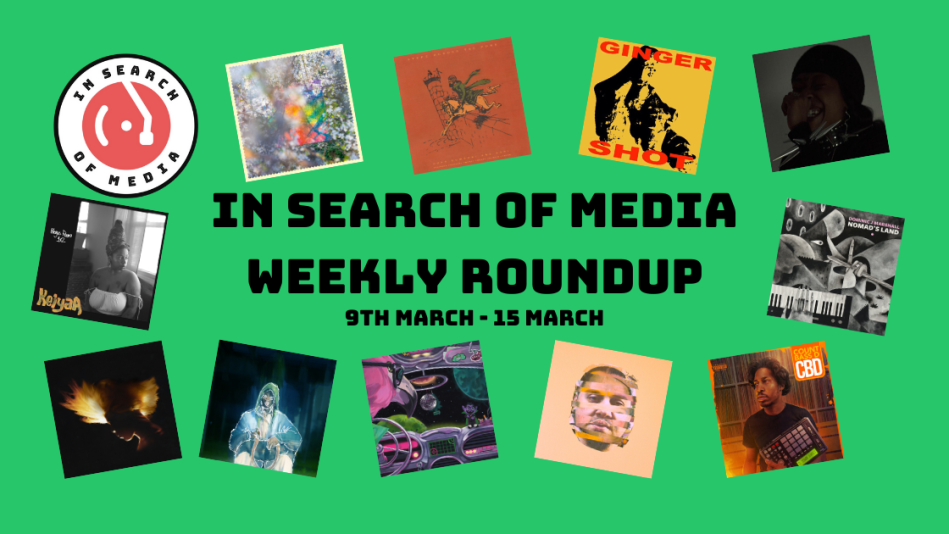 Hey everyone! Happy Sunday if I can call it that. Hope you’re all safe and healthy amidst this Coronovirus pandemic. Stay hydrated, eat good and smoke some, I’m sure it’ll be better in a few weeks. For your music discovering pleasure, I have selected some of my favourite releases over the last few weeks, so I hope you enjoy!

March 2020 Book of the Month: James Baldwin – If Beale Street Could Talk

It’s a profound, delicate and socially aware piece of work that captures the essence of what defines black people in America. It’s relevant to today’s world, where black people are still being racially profiled and abused by police officers, where black men are being incarcerated at a disproportionate rate as white males, where the likelihood of finding a job in a white-dominated world is slimmer than it should ever be, where black women can’t be respected in the same way as white women could and most importantly when justice is rarely found. The list of examples goes on, and it’s saddening to think that this won’t improve anytime soon.

If Beale Street Could Talk is an essential, classic work of art that should be respected and acknowledged as one of the finest pieces of modern literature in American history. James Baldwin, you are a genius! Hope you pick this one up this month! Read more

On his brand new album Sixteen Oceans, the talented UK-based artist continues to push his sound forward with incredibly lush and textured sounds that capture a sense of optimism and positivity, which is something I definitely needed at this point in time. Four Tet’s ability to create soulful, meditative and spiritual music year in year out is what makes him one of the most exciting artists still working today. He doesn’t push the boundaries with Sixteen Oceans, he doesn’t need to. His music is timeless, and I just hope he continues creating gems like these for years to come! Read more

Recorded in Dulwich, London in February, rapper Goya Gumbani and producer Bori have released a stellar 5-track EP titled Steps Across The Pond. The murky, dark and eerie off-kilter production is met with some introspective and poignant lyricism. Medhane, MIKE, Sideshow, AKAI SOLO & Pink Siifu appear on this project with incredible verses, Redlee got some production credits too. It’s a soulful, intricate and head-bob heavy release at beautifully captures so much of the soul and pure artistry from some of the most exciting artists of this generation. Definitely recommend and I couldn’t be happier for everyone involved, the glow-up is real!

US-based artist Sideshow comes through with a new EP titled Ginger Shot, shortly after he released the amazing 9-track album FARLEY. Ginger Shot contains 4 tracks and features Medhane and Jadasea on the raps, as well as some gorgeous, soulful boom-bap and trap-inspired beats that capture an energy to the music that’s truly infectious. Sideshow’s skills on the mic keep improving too, as his witty and personal lyrics flow effortlessly throughout the incredible production throughout. Definitely a must-listen!

Chattanooga, Tennessee rapper BbyMutha has released a brand new 7-track EP titled Muthaleficient. I’ve been a fan of hers ever since 2018’s Muthaz Day 3 and she has continued to impress since then. It’s her menacing, unapologetic and aggressive production throughout these tracks that make her, as an artist, so captivating to listen to. She raps with affirmation and confidence over aggressive trap-inspired production. The grit on tracks like “Lookin’ for Me” featuring Ttbby and “WWE” featuring Zelooperz is just crazy to me, while the electronic, fast-paced energy of “Frida” is another highlight. “Muthaleficient” and “Fuck Everybody” embody her braggadocios, no-bullshit attitude and that’s what I love about her music. Definitely recommend this one, and I hope she continues releasing gems after gems.

London-based musician Dominic J Marshall has released a brand new album titled Nomad’s Land. His soulful, synth-heavy production is coupled by incredible drumming and infectious vocal harmonies. From the angelic opener “Coldshwr” to the jazzy and melodic closer “Hypernormalised,” Dominic creates this lush and textured soundscape that brings a positive and uplifting personality, something I definitely needed at this point in time. A great body of work!

Legendary rapper and producer Count Bass D has released a brand new project titled CBD. I’ve been a fan of this man’s work for a long time, and I’m glad he’s continuing to show his talents as an artist. With funky, soulful boom-bap production, he is able to capture a classic boom-bap sound and flow with ease. The samples and instrumental shifts make for an animated, engaging listen. Count Bass D has truly done it again!

Nottingham-based rapper Juga-Naut has released a brand new album titled Bem. The 12 track album features some beautiful moments, in part due to the engaging, lush and textured boom-bap production, but also, obviously because of Juga-Naut’s engaging and vivid lyricism. His raps are inspiring, as he flows effortlessly throughout the funky, infectious production. rapping about self-love, inner-growth, while providing us with a detailed painting of his life and how he dealt with some of the hardships in his life. It’s a revealing listen, and one I recommend you sit down with and immerse yourself in. Great release!

Flamingosis and The Kount are two electronic musicians at the height of their careers so far. Their new collaborative album Maniacs! is the culmination of both their styles and influences, bringing hip-hop, disco, electronic and funk music to the mix. The wonderfully colourful and infectious release features some incredible live instrumentation, bringing guitar and synth-leads throughout to great effect. The drumming is infectious and the disco-like energy of the music is what makes it one of the more exciting releases to come out this week and this month as a whole. Go listen and enjoy!

Charleston, South Carolina musician Contour comes through with a brand new short EP titled Weight. It’s a jazzy, emotive and gorgeously produced 4-track project, with subtle piano-driven melodies and a bass and drum-heavy groove that keeps the soft and soulful quality of the music engaging and beautiful throughout the project. His vocals are also subdued, but they provide a touch of soul and ethereal tone to the music. As this is my first time listening to his music, I’ll be sure to go through his discography and immerse myself into his world. Definitely recommended!

Creative musical genius Yves Tumor has come through with an incredible new single titled “Kerosene!” After his 2018 masterpiece Safe In The Hands of Love, I’ve been hooked by this man’s diverse and experimental music, ranging from eclectic experimental to rock and punk. “Kerosene!” starts with a slow-paced, dreamy guitar sound, with Yves Tumor and singer Diana Gordon singing back and forth, also harmonizing throughout it’s 5 minute runtime. The track explodes with guitar leads that explode the track into life, and a solo that just captures such raw power. It’s safe to say that Yves Tumor’s new project, whatever it may be, is one of my most anticipated releases of this year.

Chicago-born singer, songwriter, multi-instrumentalist and producer KeiyaA has released a brand new single titled Negus Poem 1 & 2.” It’s from her debut album Forever, Ya Girl. set to be released on the 27th March. The subtle but soulful piano keys throughout the track are met by smooth, wonky basslines and infectious drumming. Her vocal performance is sublime too, really capturing a lot of the aura and beauty she evokes as an artist. This is a fantastic new single and I’m really looking forward to her debut album.