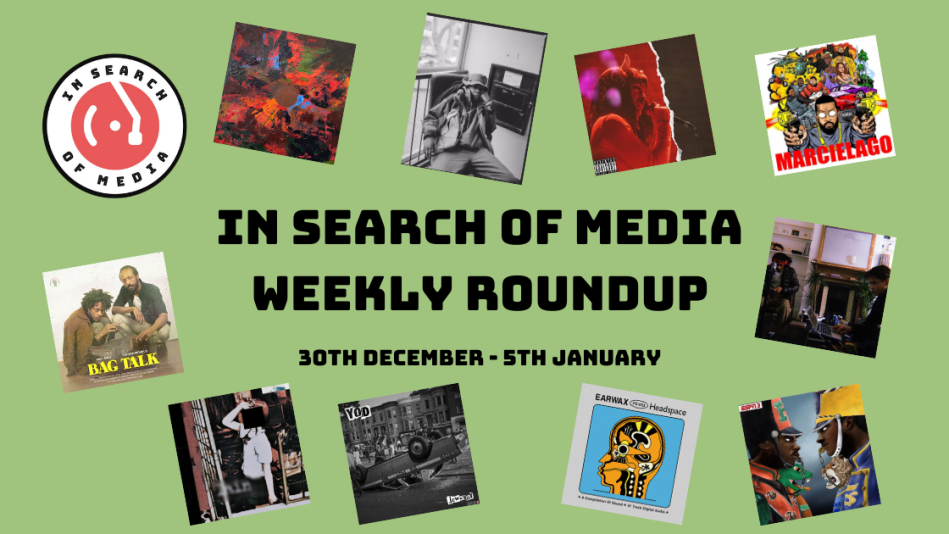 Happy New Year to everyone! I hope 2020 gives people more health, more life, more love and success! This year, I’ve decided to do things differently. In 2019, I wrote 776 posts, which included reviews, featured articles, In Search Of Media playlists, radio tracklists among other things. This year I’m trying to cut down on quantity and provide you with quality weekly posts, centralizing all music discoveries and film-related articles in one weekly roundup. In it, you’ll find all the best projects and singles I’ve discovered throughout the week, as well as the weekly playlist and radio tracklists as and when I do them.

Consistent, lyrically sharp and beautifully poetic, Roc Marciano is my rapper of the last decade

Roc Marciano’s aura and legacy comes not only from his intricate, complex and incredibly poetic lyricism but his wonderfully cinematic music. Every project sounds like a movie… Read More

Bold, experimental and soulful, Pink Siifu and YUNGMORPHEUS exceed all expectations and come through with a cohesive and incredible body of work titled Bag Talk. Produced by talents such as Vritra, Khalil Blu, iiye, Ohbliv and GriMM Doza among others, this album is such an incredibly textured and beautiful hip-hop release… read more

MAD MOON is a collaborative project between talented New York-based rapper AKAI SOLO and producer iblss. The two combine on their new album MAD SPACE to provide a mesmeric album full of introspective raps and a beautiful and soulful soundscape. Definitely one to digest! read more

Your Old Droog had one hell of a year in 2019, releasing two fantastic albums with It Wasn’t Even Close and Transportation. His third album of the year is titled Jewelry and it’s as dark, grimy and raw as his previous work. Featuring Mach-Hommy and MF DOOM on the same track again, this album is full of incredible gems that continue to prove why Your Old Droog is one of the best rappers our right now.

Chattanooga, Tennessee based rapper BbyMutha broke onto the scene in 2018 with releases such as The Bastard Tape, Vol. 1, Muthaz Day 3 and BbyShoe among other releases since, still killing it in 2019. The Bastard Tapes, Vol. 2 continues that streak of dark, trap influenced southern hip-hop that I’ve come to really love and appreciate. Great project.

Two beat tapes from elusive producer Iain titled BLEAK // DISC 1 and BLEAK // DISC 2 caught me by surprise. I’ve never heard of him before, and have no idea where he comes from, but the wild experimentation with his broken beats and soul chops make these terrific listens.

San Francisco based label Fuzzoscope released an extensive 47 track compilation album titled Earwax Headspace. It features incredible beats and tracks from the likes of Knablinz, Ahwlee, Dutchyyy, THERAVADA, slowya.roll, Wowflower and others. A must listen!

London-based Goya Gumbani has been on my radar for a few years now. He released a new single last month titled “What’s the Prize” with production from Kiina. It’s a soothing, introspective track with incredibly beautiful keys and synths throughout that just sound so beautiful. It’s a gorgeous track and I can’t to hear new music from them.

My favourite rapper is back with a brand new single produced by the legend Wu-Lu titled “The Room (Freestyle).” The eerie and unsettling beat gives Lex Amor the perfect soundscape for her to talk her shit. Her incredible flow and cadence is what makes this such a captivating things. Her new project, set to be released early this year is what I’m anticipating the most so far in 2020. Music video is directed by Aiden Harmitt Williams.